Dodie's Ring On My Finger!

It had been the end of one of the greatest, early battles of my faith as a new Christian.  There I stood next to Al at Lakewood Church, on a Wednesday evening service and Norvel Hayes was set to preach.  No one knew Al was home; it was a regular mid-week service and


the time for prayer had just begun.  As people began to make their way to the altar in response to an invitation for prayer, I leaned over to Al and whispered, "we have to go", and took him by the hand and led him toward the aisle.

He had just been released from prison, after serving 4 months and 18 days on a ten year sentence for a revoked probation; we had just received the miracle of his very early, unexpected release.  He needed prayer.  I needed prayer after standing, along with six of our eight children, during that time.  We needed prayer as a family!  His sentence had come after only three weeks from the day we had given our hearts and lives over to the Lordship of Jesus Christ.  We had all just received salvation as a family, when this happened!  Al had just returned to the Lord from years of being a backslid Christian, several times over.  We were ready for a new life!

I walked in front of him toward the altar, when suddenly it was as if there were no floor beneath me.

We made our way toward the prayerline, as people began to realize it was him; you could feel faith rising.  These were people who had witnessed our coming to the Lord.  We seemed to stand out in the church, as the family with a lot of children!  They witnessed our children and myself during this trying journey, so soon in our walk with the Lord.  My children and I attended church every time the doors were opened, in spite of our trouble.  We stood in every prayer line and not always for ourselves, as a sign of our faith in action, in spite of our own needs.  We needed a miracle from God!

We got to the altar, when the heads of security began to welcome him, and ushered us to the very center in front of the pulpit.  Dodie rejoiced upon seeing me standing there with him, and turned to let pastor Osteen know he was home... the whole church had been standing with us, for his release!

Suddenly and without warning, as pastor Osteen went to greet him and Dodie came to embrace me, I felt a gentle thrust behind me from the Holy Spirit and blurted out to her, "we've been living together in sin for three years, and we want to be right with God".  What a shock, since everyone thought we were ALREADY married! 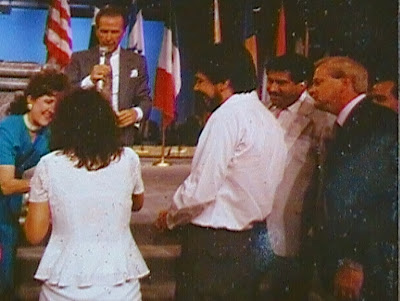 She praised God, much to my surprise after just confessing our adulterous living arrangements, but quickly turned to pastor Osteen and told him, who quickly quieted the orchestra and got the attention of the church.  There were over 3,000 people present, anticipating the ministry of Norvel Hayes.

After a few questions, pastor Osteen jokingly asked if we wanted the "long version or the short version" of a ceremony, but we didn't have a ring!  Without hesitation Dodie placed her own wedding ring on my finger, to get us through this very special moment, and John Osteen married us after three years of living together in sin.


Long story short, that was 25 years ago, now.  I was 25 years old.  There was no way of ever knowing all that the Lord had in store for us at that moment.  We just knew we had to make it right, and we needed the blessing of the Lord.  We had been through failed marriages before, and both had children from previous marriages with one between us at the time.  Our family needed the blessing of God on our lives and in our relationship. 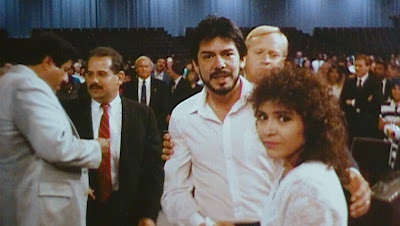 That's Norvel in the background, in the long black tie and blonde hair.  He finally got to preach after about a half hour ceremony and response from the people in the congregation; they suddenly and without warning began to come from all over the church.  Security and the Usher's began to quickly pull out containers normally used for gathering the church tithes and offerings.  The people were bringing gifts of money and John Osteen reached over to my NOW husband, and placed a $100 bill in his hand and gently said,, "I know it's been a while since you've had one of these. Be blessed!".
I'll bet Norvel didn't think he'd be witnessing a sudden, unrehearsed and completely led by the Holy Spirit, wedding that night!  It was a very special night in August that year.

What a tremendous move of God's Holy Spirit, being demonstrated in the lives of hurting people.  That's what we were that day.  We had come out of a life of such darkness and pain, such as many live today.  Staying connected to a strong church that taught us how to "fight life through", and "hold to God's Word" through every storm and challenge, has brought us through.

We were never the same since that evening at Lakewood Church.  We have continued to do as we were taught, holding to the Truth of God's Word.  In less than five years, John Osteen would go on to personally Ordain us through the laying on of hands, and launch us into full time ministry.

We are grateful to the Lakewood Church family, from those "glory" days!  What a core group of people who love God.  Forever grateful to John and Dodie Osteen for their simple faith, and incredible example of servanthood and passion for Christ; and most especially for hearing from God in the middle of a church service, with a guest speaker and a full house.

Our marriage and family are forever stronger for it!

Sandra and her husband Al, pastor New Life Ministries in Richmond, TX.
Sandra Cerda is an author and public speaker, pastor and worship leader.
For more on her work go to:  http://www.cerdaministries.org/
Her books can be found on Amazon.com, here:  http://www.amazon.com/s/ref=nb_sb_noss?url=search-alias%3Dstripbooks&field-keywords=sandra+cerda
Email the author at:  sandracerda7408@yahoo.com﻿

His Words are Life!

The Lord's Words are life and refreshing. I hope you enjoy reading a few favorites from my personal collection of over 35 years of writing and publishing. Blessings! ~ Sandra

Send Us Your Prayer Needs:

Get New Articles by Email